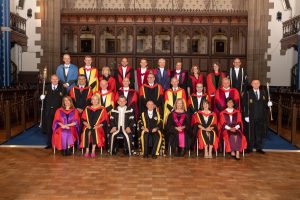 Sir Iain Macleod was admitted as a solicitor in 1987 and since then has held positions in a number of government departments. At the Foreign and Commonwealth Office, he worked at the UK Representation to the EC and at the UK Mission to the UN, and was seconded to the Attorney General’s Office. Subsequently, he was Deputy Legal Adviser at the Home Office and then Legal Adviser, Central Advisory Division, Treasury Solicitor’s Department, before taking up his present post in 2011. In 2017 he was appointed Knight Commander of the Order of St Michael and St George. He leads FCO Legal Directorate in delivering a legal service to the FCO, and to support the Attorney General and the Treasury Solicitor in delivery of legal advice to Government on international law, Brexit issues and generally.