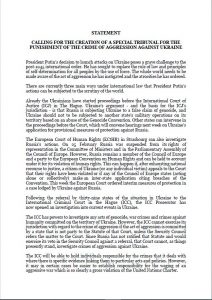 GCILS Director, Professor Christian J Tams signed a declaration, sponsored by former Prime Minister of the United Kingdom, Gordon Brown, and his wife, Sarah Brown, calling for the creation of a special tribunal for the punishment of the crime of aggression against Ukraine.

“Gordon Brown today (4 March 2022) joined Ukrainian Foreign Minister Dmytro Kuleba in a call to nations across Europe and beyond to support the creation of a special tribunal to punish President Putin for the crime of aggression against Ukraine.

At an online event organised by the Chatham House think-tank, Mr Kuleba and the former British Prime Minister joined international lawyers to make a joint plea for western nations to set up such a tribunal to prosecute President Putin and his accomplices for the crime of aggression against Ukraine.

The plan to set up an new international tribunal is modelled on the actions of the nations which, during World War II, met in London to draft a resolution on Nazi war crimes. This led to the creation of the International Military Tribunals and the Nuremberg trials. (…) A declaration calling for the Tribunal to be created has been published today signed by 38 leading lawyers, academics and human rights campaigners. They include Ben Ferencz, who was one of the lead prosecutors at Nuremberg, now aged 102.”