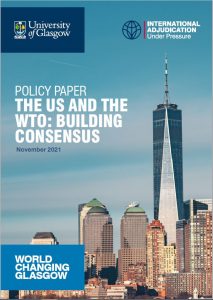 GCILS’ Dr Henry Lovat, co-authored a new policy paper on WTO-US relations and the future of international trade governance, titled “The US and the WTO: Building Consensus”.

The paper was produced as part of the “International Adjudication Under Pressure” research agenda led by Dr Lovat, with funding support from the Carnegie Trust for the Universities of Scotland and the ESRC.

The multilateral trade regime is in crisis – with continued legislative stasis and the US-prompted collapse of its dispute settlement machinery, the WTO’s future is highly uncertain. At the same time, though, the need for a functional global trade order is as critical as it has ever been.

In this paper the authors assess three potential future paths for global trade regulation. The analysis highlights the continued need for a global trade regime, and underlines the importance of dispute settlement reform as a key step towards revitalising the WTO.

• Institutionally, the WTO has long been moribund as a forum for global trade liberalisation.

In this paper we assess three possible avenues for the future development of international trade dispute settlement and the broader multilateral trade order, centred around (1) the status quo, (2) increased plurilateralism, and (3) multilateral trade institution reform.

Each option features a mix of short and long term advantages and disadvantages, including in the case of (3) significant political challenges that should not be underestimated. Notwithstanding these, however, we recommend the long-term pursuit of staged multilateral institutional reform, prioritising dispute settlement arrangements.”