Glasgow Centre for International Law and Security (GCILS) launched its new Working Paper Series, aiming at publishing, disseminating and promoting high quality research papers. It will focus on all matters of international law and will be available in electronic form on this website, as well as on the SSRN’s pages.

Anyone wishing to participate in the series can contact James Devaney (james.devaney@glasgow.ac.uk) or the GCILS team (gcils@glasgow.ac.uk). Submissions are welcome throughout the year.

Please click on the cover pictures below for the newly uploaded papers: 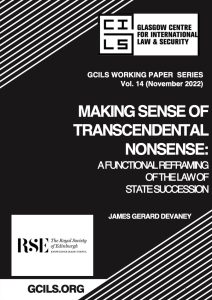 Making Sense of Transcendental Nonsense: A Functional Reframing of the Law of State Succession

“The law is replete with ‘transcendental’ legal concepts. These are concepts which cannot be assessed against any verifiable reality. Of course, not all legal concepts are transcendental. Some, like pacta sunt servanda, bear a direct relation to the social facts that they are meant to regulate. The modalities of the law of treaties provide tangible criteria such as signature or notification of accession to which we can point and say ‘this state has expressed its consent to be bound.’ The expression of consent to be bound can be defined in terms of experience, in the sense of practical contact with facts or events, and various empirical decisions flow from this experience. Such consequences include the fact that the state cannot easily free itself from the obligation it has taken upon itself, save for in certain, limited circumstances.” (Read more) 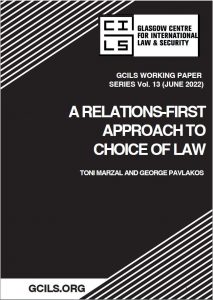 “The question of applicable law remains central in the doctrine and practice of private international law (PIL), raising a host of disagreements around the criteria that govern its determination. Paradoxically, this question is commonly approached through a positivist lens, whilst at the same time being guided by a commitment to individual autonomy. In this paper we propose, against mainstream practice, to frame the issue of applicable law as involving a series of questions about relational morality, which ought to be answered independently of any established legal order, and from a concern for the common good. We will proceed in four parts… ” (Read more) 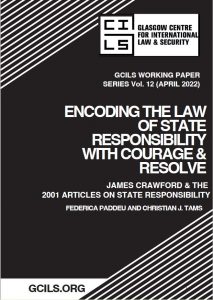 Encoding the law of State responsibility with courage and resolve:
James Crawford and the 2001 Articles on State Responsibility

“The breadth of James Crawford’s work as an academic and practitioner of international law
is astonishing: from boundary delimitation to foundational sources questions to the
complexities of annulment in investment arbitration, little seemed beyond his grasp or interest. From the 1990s onwards, State responsibility became a focus of his work, guiding the International Law Commission (ILC) through a swift second reading of the Articles on
Responsibility of States for Internationally Wrongful Acts (Articles). The eventual text, adopted in 2001 and annexed to United Nations General Assembly resolution 56/83, while reflecting a collective ILC effort, bears his imprint. In this contribution, we take three observations by Crawford as prompts for a discussion of both his role in their crafting and of the Articles’ place in contemporary international law.” (Read more)

The ILC Articles at 20

“The Articles on the Responsibility of States for Internationally Wrongful Acts (Articles), developed by the International Law Commission (ILC), turn 20 this year. On 9 August 2001 – 45 years after the first report by Special Rapporteur Francisco García-Amador on the topic, after 5 Special Rapporteurs and 34 reports by them – the ILC adopted the final text of the Articles, thus bringing to an end work that (in the words of Rosalyn Higgins) were it not for the Commission’s broad understanding of responsibility, ‘should on the face of it [have] take[n] one summer’s work’.3 On 12 December 2001, the UN General Assembly ‘noted’ the Articles and commended them to the attention of Governments in December.4 Since then, reflected in successive reports compiled by the UN Secretary-General, the Articles have become the obvious reference point for debates about State responsibility: they are invoked, applied, cited, criticised, studied by nearly everyone working in or with international law, from undergraduate students to investment tribunals, and even domestic courts.5 They reflect international law’s everyday, routine, application: mostly unspectacular, sometimes pedestrian; dramatic only rarely. What is more, most readers, users, students, critics have been quick to adopt the ILC’s jargon and categories.” (Read more) 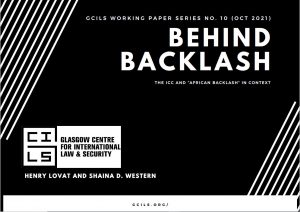 Behind Backlash: the ICC and “African Backlash” in Context

“In recent years there has been significant interest among scholars and practitioners in a perceived wave of backlash against the International Criminal Court from African governments. The portrait this growing literature may suggest of African relations with the ICC, however, is somewhat myopic. While there has certainly been strong opposition to the ICC from several African governments, in this paper we put this into broader context, arguing that a focus on “backlash” masks variation and nuance, and even support for the ICC from many African governments. While some governments have expressed opposition to and engaged in antagonistic behaviour towards the ICC, others have expressed views and behaved in manners supportive of the ICC, helping to bolster the Court during this crisis. In this paper, we set so-called “backlash” against the ICC in its broader conceptual context, developing a series of propositions about government attitudes and behaviour towards the ICC, which we then test using an original dataset. In doing so, we make three contributions.” (Read more) 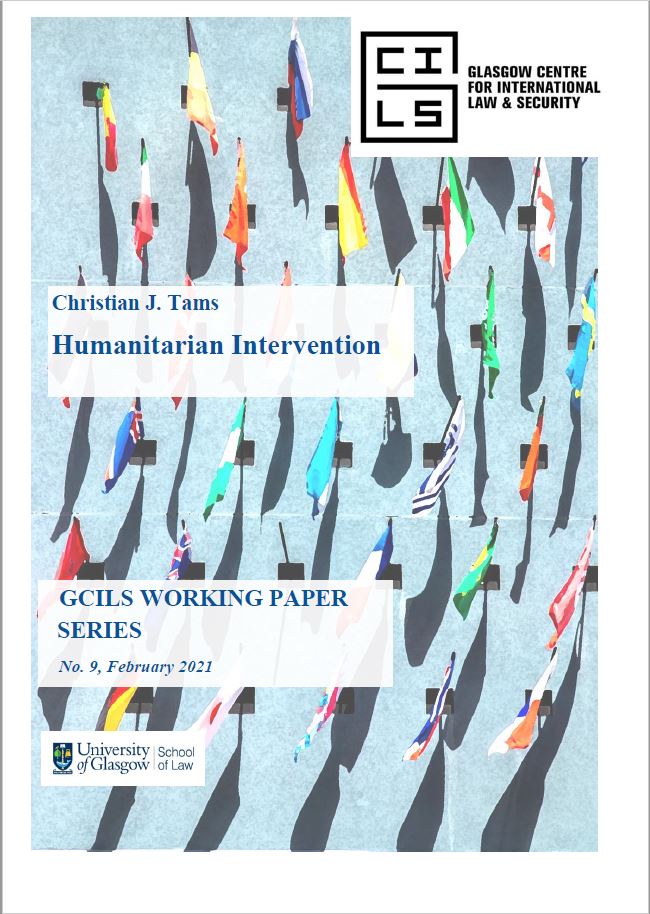 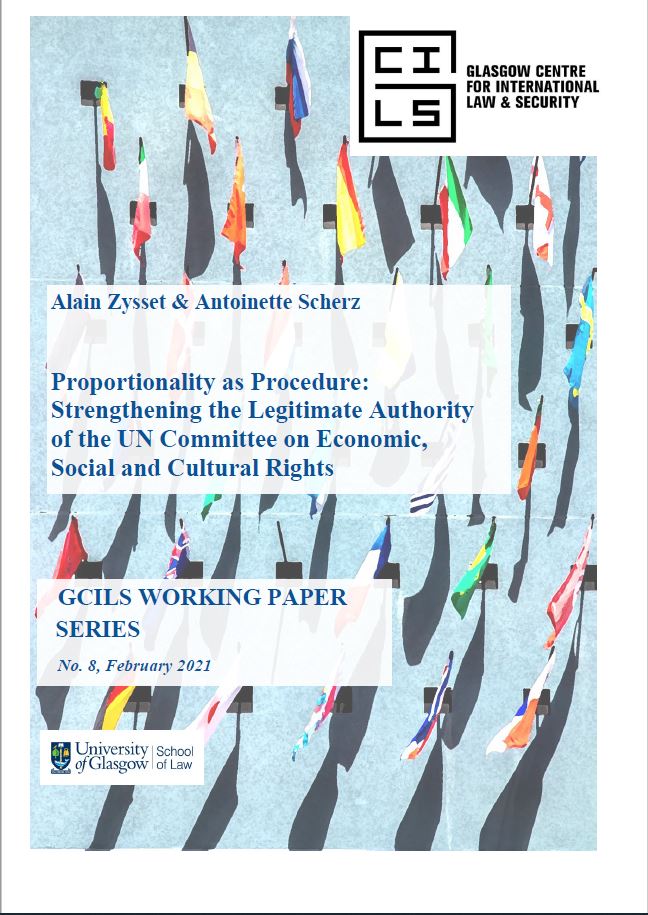 Proportionality as Procedure: Strengthening the Legitimate Authority of the UN Committee on Economic, Social and Cultural Rights

“The Committee on Economic, Social and Cultural Rights (CESCR) has a new mechanism to receive individual complaints and issue views. This development makes the question of how the CESCR should interpret the broad articles of the International Covenant on Economic, Social and Cultural Rights more pressing than ever. Most commentators on the legitimacy of the CESCR’s interpretation have argued that interpreters should make better use of Articles 31-33 of the Vienna Convention on the Law of Treaties (VCLT) in order to improve the legitimacy of their findings. In this article, we argue conversely that the individual communication mechanism should be evaluated and reformed in terms of legitimate authority. In the context of the CESCR’s process of interpretation, we contend that proportionality is better suited than the various interpretive options of the VCLT to offer a consistent procedure that is able to generate legitimacy by attenuating the tension between personal and collective autonomy” (Read more) 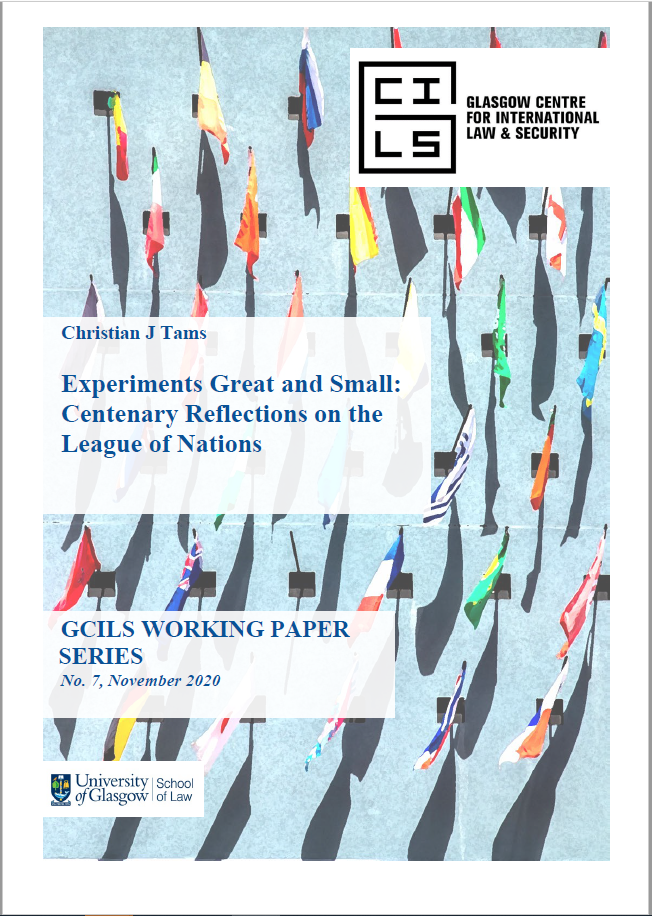 ” Given the abundance of existing League scholarship, the aims of the present contribution cannot but be modest. What it offers is a series of sketches of the League, as seen from the distance of a centenary. These sketches approach their object from two perspectives: three of them provide a highly condensed account of the League’s life (section II); two others draw out some of its legacies (section III). Needless to say, the engagement is selective, the treatment unfinished. But the sketches hopefully capture essential aspects of the League and draw the readers’ eye to features that are worth remembering a century later. ” (Read more) 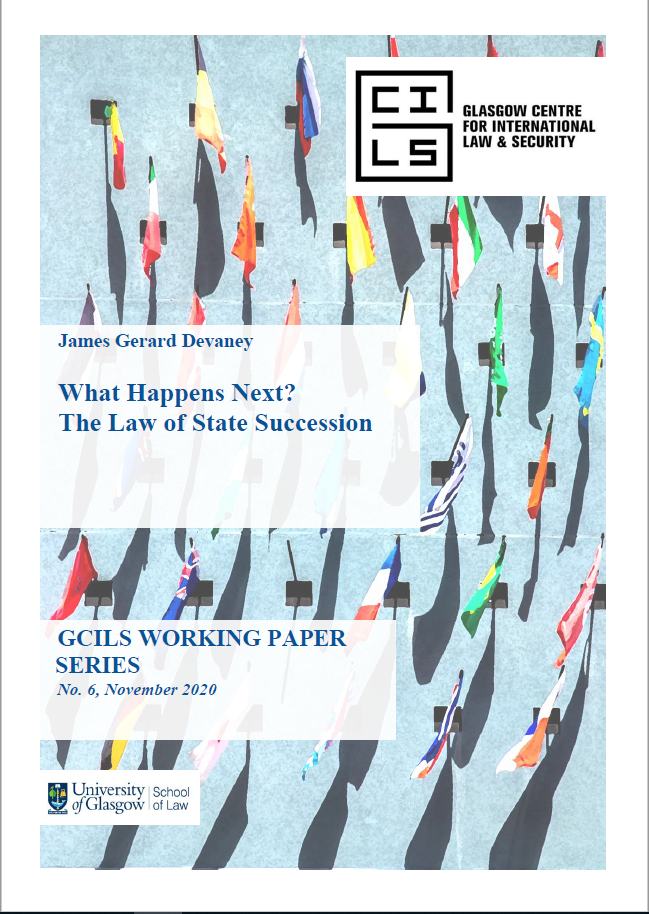 James Gerard Devaney
What Happens Next? The Law of State Succession 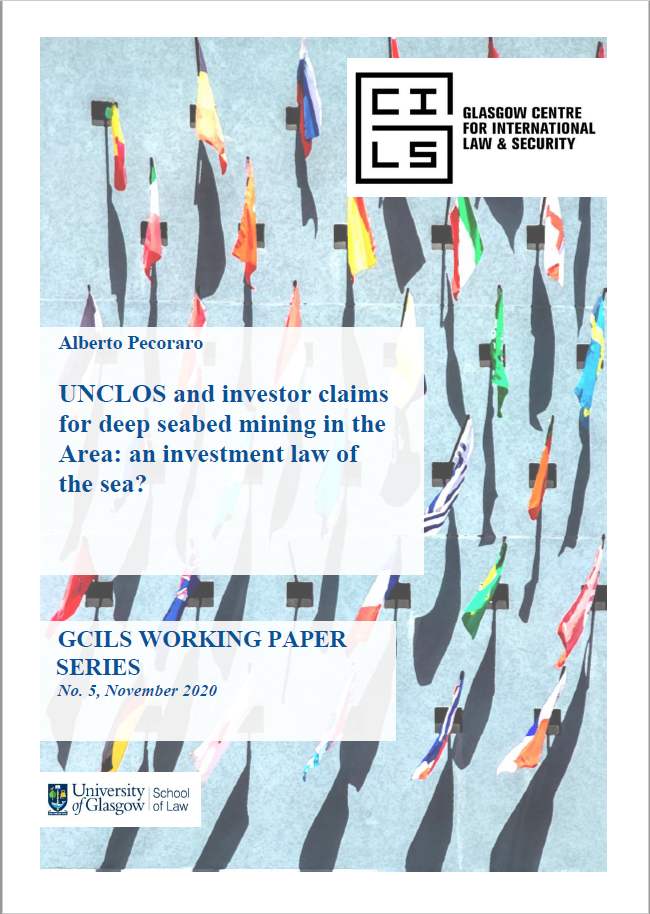 Alberto Pecoraro
UNCLOS and investor claims for deep seabed mining in the Area: an investment law of the sea?

“Foreign capital has increasingly become involved in the exploration for deep sea minerals in the Area. Foreign owned companies have received the sponsorship of their state of incorporation, as required by UNCLOS to be granted an exploration contract by the International Seabed Authority. Sponsoring states’ policies toward such foreign owned entities may go further than the mere implementation of UNCLOS obligations by pursuing national objectives such as better environmental protection or greater financial benefits for the local population. However, international law confers certain protections to foreign investment by binding states to respect an international minimum standard of treatment. Various UNCLOS provisions incorporate those guarantees, which could consequently be litigated through the dispute settlement system in Part XI of the convention. Yet only the contractors’ state of nationality and the Authority have, under the convention, the required standing to do so.” (Read more) 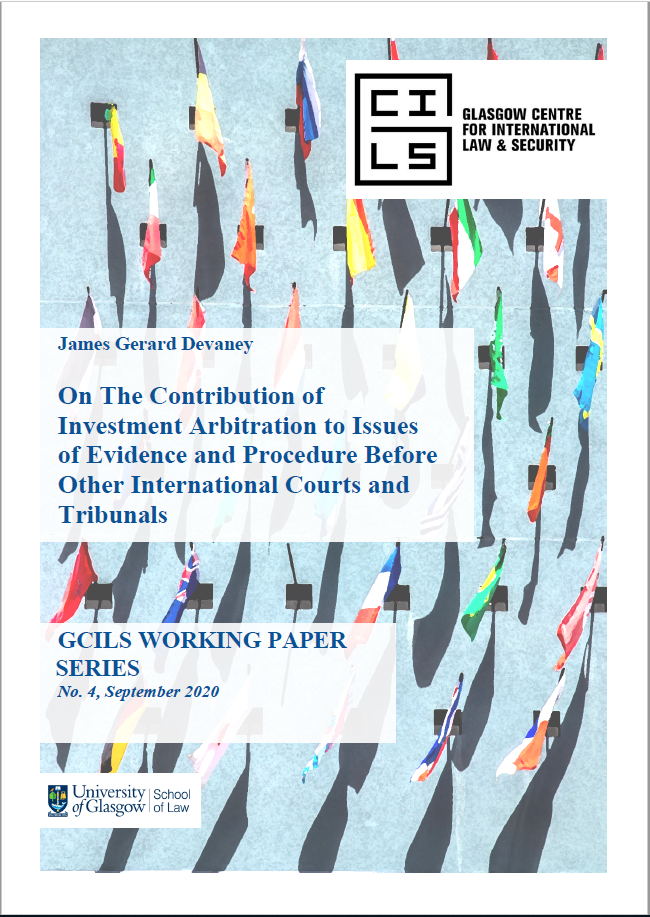 “This chapter examines the contribution of investment arbitration to international dispute settlement more generally in relation to matters of evidence and procedure. Part 1 examines the practice of a number of inter-State dispute settlement fora in an attempt to gauge the contribution of the considerable body of practice of investment arbitration which has been built up over the course of the last few decades. It is shown that, at least at this point in time, this contribution is difficult to discern and appears to vary from one context to another.” (Read more) 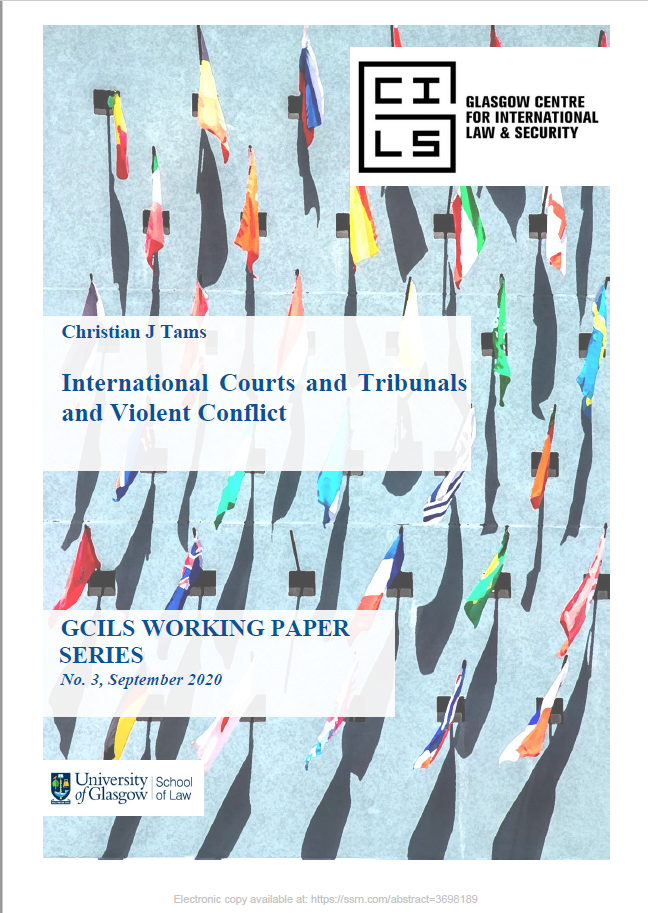 “This chapter examines international adjudication and arbitration, assessing the diverse roles of international courts and tribunals (ICaTs) in relation to violent conflicts. It shows that, over time, ICaTs have come to render decision upon decision, but – contrary to the expectations of early arbitration movements – hardly ever prevent ‘wars between nations’. Their mandates have been expanded, but typically only cover aspects of violent conflicts. While such aspects are today increasingly submitted to arbitration or adjudication, ‘conflict litigation’ remains controversial and challenges the authority of ICaTs. As the chapter demonstrates, the significance of arbitration and adjudication over questions of violent conflict has varied over time and forms part of the general history of international dispute resolution. Having surveyed this general history, the chapter sketches out the evolving legal framework governing courts and conflicts. It discusses which aspects of violent conflicts are addressed by ICaTs under contemporary international law and highlights current challenges of ‘conflict litigation’.” (Read more) 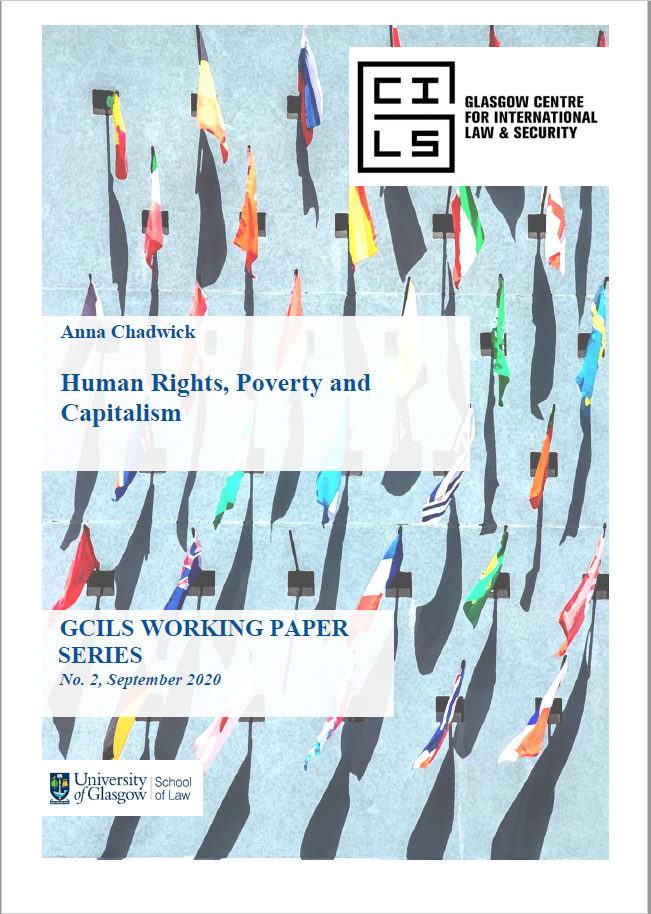 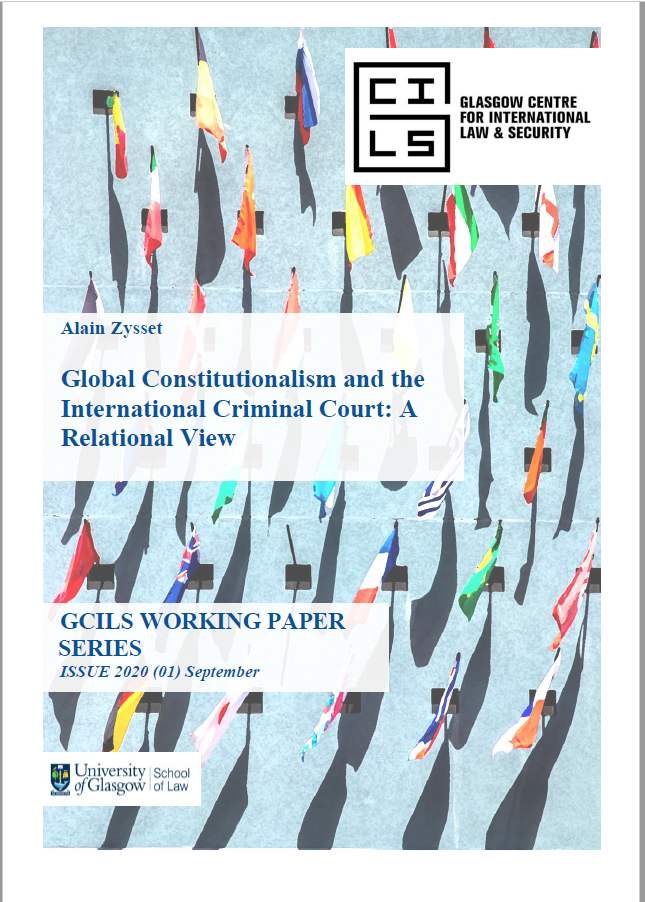