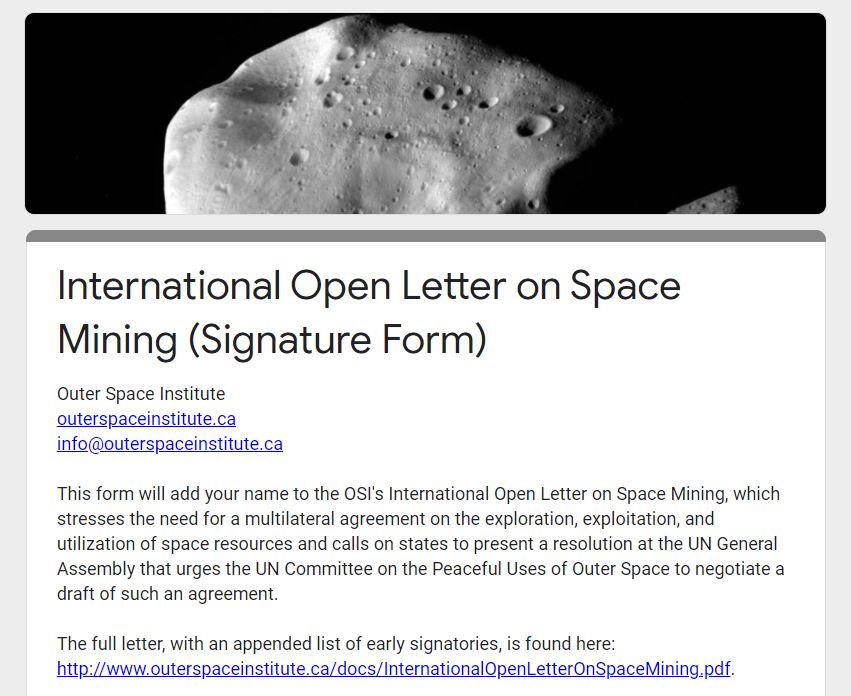 International Open Letter on Space Mining has been signed by Nobel Laureates, former foreign ministers and ambassadors. GCILS Director, Professor Tams, as well as Dr Cait Storr, our former colleague at the School of Law (University of Glasgow), lecturer in Property Law, signed that letter.

This important initiative “stresses the need for a multilateral agreement on the exploration, exploitation, and utilization of space resources and calls on states to present a resolution at the UN General Assembly that urges the UN Committee on the Peaceful Uses of Outer Space to negotiate a draft of such an agreement”. For more details and to sign the letter, please visit https://docs.google.com/forms/d/e/1FAIpQLSeQ80-brTLoGdyY9uPcRd6X7a6oeGCCSw3-fnlboF6jkRGNEg/viewform

“A Canadian-led effort endorsed by more than 140 scientists, former politicians and diplomats, is asking the United Nations to take the lead on drafting an international treaty that would set uniform rules for mining in space. There is widespread concern about a United States approach to mining in space that experts warn could result in a Wild West-style free-for-all where countries set their own rules for extraterrestrial resource extraction and friction develops among leading nations.” (please read the full article about the letter at https://www.theglobeandmail.com/politics/article-canadian-led-effort-asking-united-nations-to-draw-up-global-space/ )