On Thursday 17 February at 1.00pm UK time, our GCILS colleague, Dr Charlie Peevers will speak at an event organised by the Edinburgh Centre for International and Global Law- “Reading Humane with Professor Samuel Moyn (Yale): A Book Roundtable”. 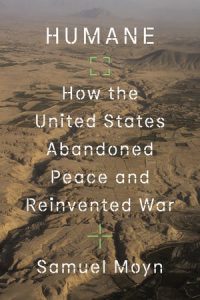 Dr Peevers will be one of the commenting academics, discussing Professor Moyn’s new book, “Humane: How the United States Abandoned Peace and Reinvented War“.

“In the book Professor Moyn asks a troubling but urgent question: What if efforts to make war more ethical—to ban torture and limit civilian casualties—have only shored up the military enterprise and made it sturdier? To advance this case, Moyn looks back at a century and a half of passionate arguments about the ethics of using force. In the nineteenth century, the founders of the Red Cross struggled mightily to make war less lethal even as they acknowledged its inevitability. Leo Tolstoy prominently opposed their efforts, reasoning that war needed to be abolished, not reformed—and over the subsequent century, a popular movement to abolish war flourished on both sides of the Atlantic. Eventually, however, reformers shifted their attention from opposing the crime of war to opposing war crimes, with fateful consequences.”

To attend this event, please visit the Edinburgh Centre for International and Global Law’s website and follow instructions for expressing interest in participating.