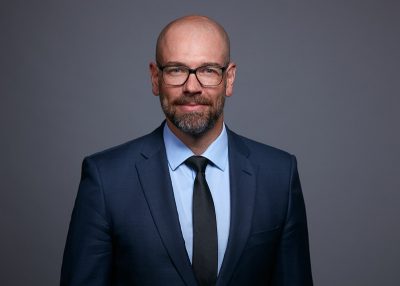 Robin Geiß serves as Director of the United Nations Institute for Disarmament Research (UNIDIR). He retains a role as Affiliate Professor at the School of Law, University of Glasgow.
Prior to his departure to UNIDIR, Professor Geiss was Director of the Glasgow Centre for International Law and Security (GCILS) and led the research group on International Law, Conflict and Security.
He was the founding programme director of the Erasmus Mundus Programme in International Law of Global Security, Peace and Development and directed Glasgow’s dual degree programme in the law and politics of global security which he developed together with the Institut Barcelona d’Estudis Internacionals (IBEI).

Professor Geiß has advised international organizations and states, inter alia, in proceedings before the International Court of Justice (ICJ) and on matters pertaining to international human rights and international humanitarian law. His advisory work has included mandates from the United Nations, the Red Cross, the German Federal Foreign Office, the World Health Organization, the NATO Cooperative Cyber Defence Centre of Excellence in Tallinn, the Centre for Economic and Social Rights in New York and the Geneva Centre for Security Policy. He served as editor of the Yearbook of International Humanitarian Law and on the Lieber Prize committee of the American Society of International Law and was a member of the scientific advisory boards of the German Institute for International and Security Affairs and the Leibniz Science Campus on Transformations and Frictions of Globalization.

Humanizing the Laws of War: The Red Cross and the Development of International Humanitarian Law

Piracy and Armed Robbery at Sea: The Legal Framework for Counter-Piracy Operations in Somalia and the Gulf of Aden