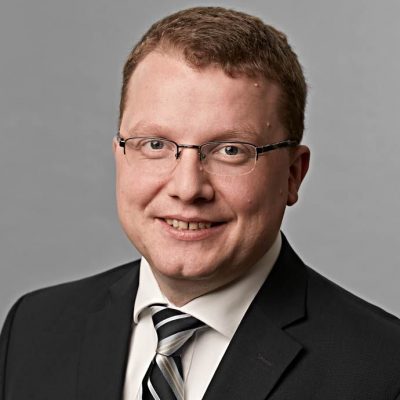 Jörg Philipp Terhechte joined the University of Glasgow as Professor for European and International Economic Law in 2018. Professor Terhechte is also academic director and chairman of the academic board of the ‘European Centre for Advanced Studies (ECAS)’, an institution established by the University of Glasgow and Leuphana University Lüneburg (Germany). He is Chair for Public Law, European and International Law at Leuphana University Lüneburg since 2012 and serves as Vice President of this university since 2016. In addition, he heads since 2013 the Leuphana Professional School, today one of the leading interdisciplinary institutions for executive education in Germany.
Professor Terhechte studied law, economics, and philosophy at the University of Bielefed. After the first state exam in law (2000) he obtained his Ph.D. in Law (Dr. iur., s.c.l.) in 2003. He finished his legal clerkship at, among others, the German Federal Competition Authority, Coudert Brothers LLP in Brussels and the U.S. Federal Trade Commission in Washington D.C. and the second state exam (bar exam) in 2005. He was appointed as Assistant Professor at Bielefeld University in 2004 and at the Department for EU Law at Hamburg University in 2006. He was promoted Full Professor for Public and European Law in 2011.

His main fields of research are public law, European law (especially European public law, competition & trade, and the EU’s foreign relations) and International law (especially WTO law and international competition law, investment protection law, state immunity and international administrative law). Professor Terhechte is founding editor of the ‘European Yearbook of International Economic Law (EYIEL)’. He published more than 20 books and approximately 300 articles, book chapters, commentaries and shorter notes on a wide range of international and European legal questions. Some of his German and English publications have been translated into Korean, Chinese, Czech, Russian and Mongolian.
In addition to his academic work, Professor Terhechte frequently advises institutes, organizations and other actors in litigation, arbitration and regulatory proceedings. He represented clients before many institutions including the European Commission, the German Constitutional Court and civil courts and testified in hearings of various German parliaments. He is, inter alia, a member of the German Society of European Law (since 2016 member of the steering group), Arbeitskreis Europäische Integration, the International Law Association, the Academic Society for Competition Law (ASCOLA), the Scotisch Competition Forum, the Scientific Advisory Board of the Institute for Economic Law, University of Münster, and at the Scientific Advisory Board (Arbeitskreis Kartellrecht) at the Federal Competition Authority.