The Persecution of the Rohingya — What Role for International Courts?

Since 2016, atrocities committed against the Rohingya in Myanmar have been widely reported — but international action has remained limited.  In late 2019, two international courts have begun to engage with the matter: the International Criminal Court (ICC) has authorised an investigation into crimes committed against Rohingya, while almost at the same time, The Gambia has sued Myanmar before the International Court of Justice (ICJ) for alleged acts of genocide against the Rohingya.  Do these proceedings mark a turning-point in the international community‘s approach to the Rohyngia crisis? And what, if anything, can international courts do to deal with mass atrocities? GCILS’ Dr Anni Pues and Professor Christian J. Tams, with our guests, staff and students in the audience, discussed these and other questions.

Dr Anni Pues is a Lecturer of International Law at the University of Glasgow. She has extensively worked with persecuted minorities and has acted as legal advisor to the ICC and NGO’s. She is the author of the forthcoming book on ‘Prosecutorial Discretion at the International Criminal Court’ (Hart, 2020). 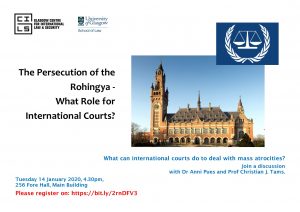