We are delighted to invite you to the public lecture with Professor Anne Orford, marking the return of the ReVisions Series. 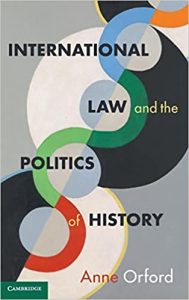 Professor Anne Orford will be discussing her book International Law and the Politics of History (CUP: 2021) which explores the ideological, political, and material stakes of apparently technical disputes over how the legal past should be studied and understood.  As the future of international law has become a growing site of struggle within and between powerful states, debates over the history of international law have become increasingly heated. Drawing on a deep knowledge of the history, theory, and practice of international law, Anne Orford argues that there can be no impartial accounts of international law’s past and its relation to empire and capitalism. Rather than looking to history in a doomed attempt to find a new ground for formalist interpretations of what past legal texts really mean or what international regimes are really for, she urges lawyers and historians to embrace the creative role they play in making rather than finding the meaning of international law.

To join us on Friday 30 September at 12 noon UK time via Zoom, please register here on our Eventbrite page  and you will receive the Zoom link to join included in the registration confirmation. 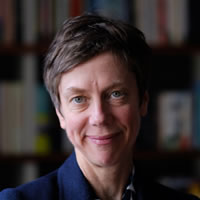 About the ReVisions Series:

The Glasgow Centre for International Law & Security hosts a regular seminar series ReVisions which invites scholars to share their current research on international law.  The process of revision provokes a re-interpretation of the record of international law that seeks to rethink and re-define the central questions that we should ask about, of, and for international law. At the centre of this exercise lies the recognition of the importance of perspective, both in its temporal and spatial orientations: revisioning from a situated perspective entails a critique of the familiar ‘god trick’ of objectivity (Donna Haraway); revisioning from a temporal perspective that looks both backwards and forward opens the possibility of displacing the uniformity of received memory with a multiplicity of knowledges that otherwise would be rendered silent and invisible.  Given the worldmaking forces highlighted by Nelson Goodman, in particular that “we dismiss as illusory or negligible what cannot be fitted into the architecture of the world we are building”, we call attention to the politics of history-making, its present construction and its potentialities, and the politics of ‘we’ in re-imagining different worlds of law. Details of past and forthcoming speakers can be found here. 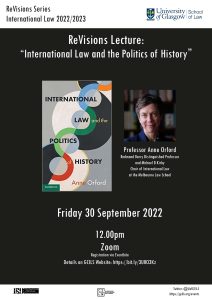