Judge Joanna Korner in conversation: before, during (and beyond?) the International Criminal Court 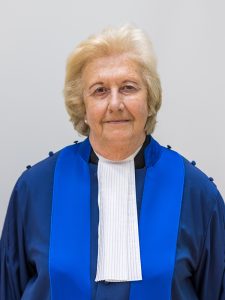 We are delighted to invite you to our first event in the new calendar year.

On Monday, 9 January 2023 at 5.00pm UK time, in 256 Fore Hall in the Gilbert Scott Building, we will welcome Judge Joanna Korner, for an in-person only talk, chaired by Dr Henry Lovat, and followed by Q&A exchange with our audience.

To attend the event, please register via Eventbrite here https://bit.ly/3j8hI6A

Her prior experience includes a total of eight years (1999-2004 and 2009-2012) as a senior prosecutor at the International Criminal Tribunal for the former Yugoslavia, including leading in the cases of Prosecutor v. Mićo Stanišić and Stojan Župljanin, Prosecutor v. Radoslav Brđjanin and Momir Talić, and Prosecutor v. Milomir Stakić.

Judge Korner has organised and taught on numerous training programmes on international criminal law and advocacy for judges and lawyers from different regions. Between 2004-2005, she was also Senior Legal Adviser to the Chief Prosecutor of Bosnia and Herzegovina, during the establishment of a War Crimes Section in the country’s State Prosecutor’s Office.

Judge Korner studied law at the Inns of Court School of Law.  In 2004 she was Appointed Companion of the Order of St. Michael and St. George (“CMG”) for services to international law. 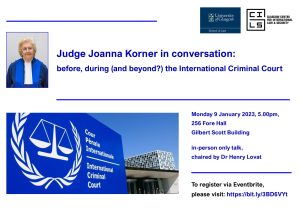