Exploring (M)otherness through International Law: Lessons from the Mothers of the Fatherland – seminar with Dr Reut Paz

We would like you to invite you to an event for our staff and students, with a guest speaker, Dr Reut Paz from Giessen University (Germany).  Dr Paz will present her paper titled “Lebensraum of Their Own: Lessons from the “Mothers of the Fatherland”.

The event will take place IN-PERSON ONLY, on 4 October 2022, at 3.30pm in Room 207, 10 Professors Square and is aimed for our staff and students. To register to attend, please visit our Eventbrite website here. The registration is on “first come – first served” basis and the number of tickets is limited, so please make sure you register as soon as possible.

We hope to see you on 4 October! 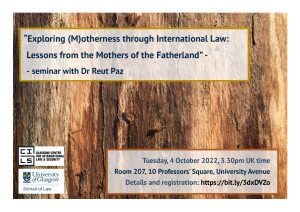 Lebensraum of Their Own: Lessons from the “Mothers of the Fatherland” –  ABSTRACT:

“The German language—especially since the National Socialist time—nurtured a special, if not obsessive, relationship with the meaning and purpose of ‘motherhood’ that is interconnected to ‘womanhood’. The tension here is between the symbolic universalism of motherhood on the one hand and its German particularistic dark legacy that drew much of its apparatus from Christian political theologies—upon their Catholic and Protestant differences, similarities, ambivalences and histories—on the other hand. Given motherhood itself is simultaneously a metaphor—or rather a social/political construct with a burdened past, present and future—that has a clear physical signifier, the need here is to examine the dialectical relationship between German political theologies, however secular these may be, and motherhood in the Third Reich because of the way it camouflaged the gigantic operation of both the Nazi self-esteem, its death machinery but also its attempt to eradicate Jewish and Christian images and influences from both the private and public spheres.

My contribution to (How to Do) Political Theology without Men? seeks to draw from the German experience, or the “Mothers of the Fatherland”, in order to examine the manner in which Nazi women carved an antithetical and complimentary Lebensraum to their men’s militant version. While such a women-only-space remained entirely imaginary, these women were committed to creating “a peaceful social sphere within which women of all classes and ages who would cooperate to revive the gospel love and harmony.” The overarching question is not only why women committed to a political party—in slightly higher numbers to men—that held such blatant contempt to their rights and freedoms, but also how did it benefit them? After all, it cannot be assumed that these women—who had, during the Weimar Republic, the closest thing to equality women had ever had, chose to lose these rights and freedoms for nothing in return.”