“Calculating sovereignty. The law and politics of the valuation of foreign investment” – in-person workshop

“Calculating sovereignty. The law and politics of the valuation of foreign investment”

We are delighted to invite you to a workshop, aimed only for staff and our PhD students, organised in collaboration with our colleagues from the Legal Theory Research Group.

On Tuesday, 18 October at 3.00pm we will be hosting two guests-speaker scholars, presenting their work on valuation of foreign investment:

Each will have two Glasgow colleagues: Anna Chadwick (GCILS) and Yingru Li  (from the Adam Smith Business School), and Marco Goldoni (Legal Theory, Glasgow) and Franziska Paul (also from the ASBS), discussing their papers and research.

Dr Antonio Marzal will chair and will begin the event with a short introduction to the theme of the law and politics of valuation.

To join us, for what promises to be an interesting conversation , with approaches from the angles of international law and legal theory research, please register via our Eventbrite pages here.

The number of in-person places is limited and they will be allocated on the first-come-first-served basis!

There will be an opportunity to join the event also in-line, via Zoom. Log-in details are provided below:

Please see below the abstracts of the paper that will be resented by our guests, the two papers will be pre-circulated in full one week in advance. Those who wish to read the papers in advance please contact Toni Marzal (Antonio.marzal@glasgow.ac.uk). 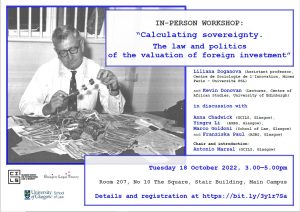 The sword of discounting:  valuation and temporal appropriation in the state-investor relationship over Chilean copper mines

Drawing on a broader research on the historical sociology of discounting, I will discuss debates on the different valuation techniques that were mobilized to calculate the compensation to be paid to investors in the event of expropriation, in the case of copper mines in Chile in the second half of the 20th century. Discounting (also known as DCF, for discounted cash flow, or NPV, for net present value) is a technique that derives the value of an entity from the future flows of costs and revenues that it is likely to generate; it translates these future flows into the present by means of a number called the discount rate. Jose Pinera, minister of mines in Pinochet’s government and author of the Constitutional Mining Law of 1981, described discounting as the “sword” that enabled him to cut the “Gordian knot” of attracting foreign investors while maintaining the public ownership of mines. The sword of discounting untied the valuation that Salvador Allende proposed to investors when he nationalized Chilean copper mines in 1971: a valuation that resulted in a price equal to zero. I analyze Allende’s and Pinera’s valuations in terms of their temporality, and discuss the collision between the past and the future in the quest for value. I show that Allende’s valuation was firmly oriented towards the past: the accounting past of the mining operations of the multinational companies that were being expropriated, but also the political past of Chile and the exploitation of its natural resources. By contrast, Pinera’s valuation was firmly oriented towards the future: a future over which investors were granted control through the guarantee that the expectations they had formed in the past will be met. Asking to what extent one is entitled to a future – translated in its present value – on the grounds that she holds expectations about that future, I conclude on the contribution of valuation techniques like discounting to processes of temporal appropriation.

The Price of Decolonizing Banking in Tanzania

In early 1967, Julius Nyerere shocked the world by nationalizing the commanding heights of Tanzania’s economy, including the nine banks operating in the country. This talk examines the resulting struggle over valuation between Barclays Bank (Dominion, Commonwealth, and Overseas) and the Government of Tanzania. For the postcolonial state, bank nationalization represented a necessary step toward economic sovereignty, with government control over finance a necessary instrument for remaking economic geographies, temporalities, and subjectivities. For Barclays, the expropriation was a threat not only to their business in Tanzania but also the global circuits of capitalist value they supervised. Drawing on corporate correspondence, transcripts of negotiations, accounting records, and participants’ memoirs, I trace how competing ideas about value and protocols of valuation shaped the ensuing two years of negotiation. The technicalities of accounting conflicted with the politics of African socialism, leading to a halting process that not only came to determine the ultimate price paid for compensating the bank but also determining the sorts of assets and ethics that would be incorporated into these valuation practices. Decolonization was more than a political act — it involved remaking the economies inherited after empire — but the constitution of ‘the economy’ wove together aspects usually considered separately, from popular affect and calculative practices.