On 15 November 1920 the first ever League of Nations assembly convened.  In some ways, one might say that a century ago, the modern era of international organisations began.

We would like to use this anniversary as an opportunity to share a talk that one of our GCILS Directors, Professor Christian Tams recorded over three years ago, for the UN audio-visual library of international law, focusing on what became of the “new world” of 1920’s that the League of Nations was to be the beacon of.

The terrible losses of World War I produced, as years went by and peace seemed no nearer, a public demand for some method to be found to prevent the renewal of the suffering and destruction which were now seen to be an inescapable part of modern war. So great was the force of this demand that within a few weeks after the opening of the Paris Peace Conference in January 1919, unanimous agreement had been reached on the text of the Covenant of the League of Nations.
Although the League was unable to fulfil the hopes of its founders, its creation was an event of decisive importance in the history of international relations. The League was formally disbanded on April 19, 1946; its powers and functions had been transferred to its successor- United Nations.[2] 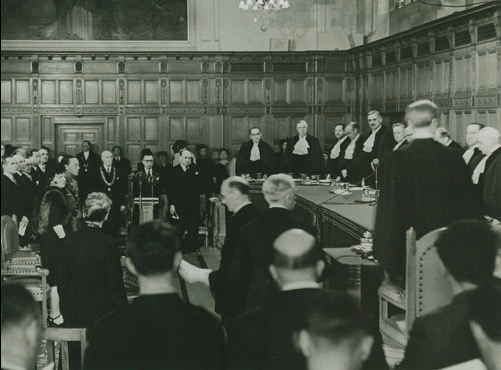 If you want to listen to the details of the birth and significance of the League as the first modern history’s  international organisation, please visit: https://legal.un.org/avl/ls/Tams_UN.html#

This recording, available in both audio and video formats, offers 3 perspectives of analysis:

Moreover, please visit: https://papers.ssrn.com/sol3/papers.cfm?abstract_id=3532745 for a publication by Professor Tams, titled “Experiments Great and Small: Centenary Reflections on the League of Nations”, offering a series of sketches of the League of Nations, as seen from a ’centenary’ distance. Three of these sketches provide a highly condensed account of the League’s life; a further two draw out some of its legacies. Taken together, they present a highly impressionistic picture of the first‚ world organization, but one that hopefully captures essential aspects of the League and draw the readers’ eye to features that are worth remembering a century onwards.